Lenora Mattingly Weber wrote books and short stories for over 40 years. She is best known for her Beany Malone series and Katie Rose/Stacy Belford books.

Lenora Mattingly Weber was born in Dawn, Missouri. When she was twelve, her adventurous family set out to homestead on the plains of Colorado. Here, she raised motherless lambs on baby bottles, gentled broncos, and chopped railroad ties into firewood. At the age of sixteen she rode in rodeos and Wild West shows. Her well-loved stories for girls reflect her experiences with her own family. As the mother of six children and as a grandmother, she was well qualified to write of family life. Her love of the outdoors, her interest in community affairs, and her deep understanding of family relationships helped to make her characters as credible as they are memorable. Mrs. Weber enjoyed horseback riding and swimming. She loved to cook, but her first love was writing.

The Work of Lenora Mattingly Weber

Lenora Mattingly Weber wrote books and short stories for over 40 years. She is best known for her Beany Malone series and Katie Rose/Stacy Belford books. Beyond these series, Mrs. Weber wrote ten non-series books which are also captivating to readers of all ages. Her numerous short stories in McCall's, Ladies Home Journal, Good Housekeeping, Saturday Evening Post, American Magazine and Pictoral Review reveal this author's amazing gift for character presentation and storytelling. In both novels and short stories, Lenora Mattingly Weber introduces the reader to characters who become real life people. These characters take on lives of their own in the readers world - so much so that readers read and re-read the stories in order to maintain the relationship with these people. Few authors are able to create such longevity in a character reader relationship.

Book Description: Lenora Mattingly Weber (1895-1971) was best known for her mid-20th century girls book series, especially those about independent girls such as Beany Malone and Katie Rose Belford. Weber was an industrious widow with six children, who also had a lesser-known career as a magazine columnist. From 1946 to 1967, Weber wrote "Mid Pleasures and Problems" for Extension, a monthly Catholic magazine in the mold of the Saturday Evening Post. In her columns, she commented on the social issues of a large swathe of the 20th Century. In the 1940s, she described post-World War II life; in the 1950s she ruminated on the pros and cons of working mothers; and in the 1960s, she addressed Catholicism after Vatican II as well as racism and segregation. Her fans have brought her girls series books back into print, spurring a mini-Weber renaissance of her fiction. However, the 266 columns she wrote for Extension magazine have remained all but lost. Until now. This collection, curated and edited by Betsy Edgerton, contains 50 of Weber's best columns and showcases her most personal writing.

In 2002, a lovely Lenora Mattingly Weber reader wrote to LMW's son, David Weber, providing a very special letter along with her generous permission to print it in our publications. This reader received her letter from LMW in the summer of 1970. We give grateful credit to Suzanne LaMotte Stepp for warming our hearts by sharing this treasure with all of us. We will refrain from editorializing as the words speak for themselves. Joy Canfield, Image Cascade Publishing

"My dear Suzanne," she wrote, "How very sweet of you to take time to write me about my books! And your kind words about them certainly warmed the cockles of my heart -- although I've never been sure what cockles are.

"I'll tell you a secret. Beany is almost a younger me. That is, she has, you might say, my better qualities, such as loving to feed people and do for them but none of my ornery traits. My own daughter, Rosemary, is a much nicer person than I -- she's always gentle, quiet, and understanding and undemanding.

I got the name, Beany, from a girl friend of hers whose name was Bernice but who was called Beany. We have five boys and a girl, and Johnny Malone is a dead ringer for our boy Dave. Davie, too, walks with a light step, has that beautiful smile; he brings a lift into any room and like Lincoln ‘malice toward none.' Davie works for NBC in London now." 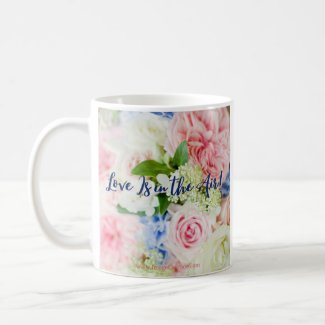 Love Is in the Air for Beany Malone! Coffee Mug
by imagecascade